Save documentation as PDF

The Missed Calls report analyses your missed calls in order to highlight which callers have and haven't been responded to. Each missed call is given a priority rating depending on how many times and how often the caller attempted to make contact. The time window in which a call must be responded to, if it is to be considered handled, is user-definable. 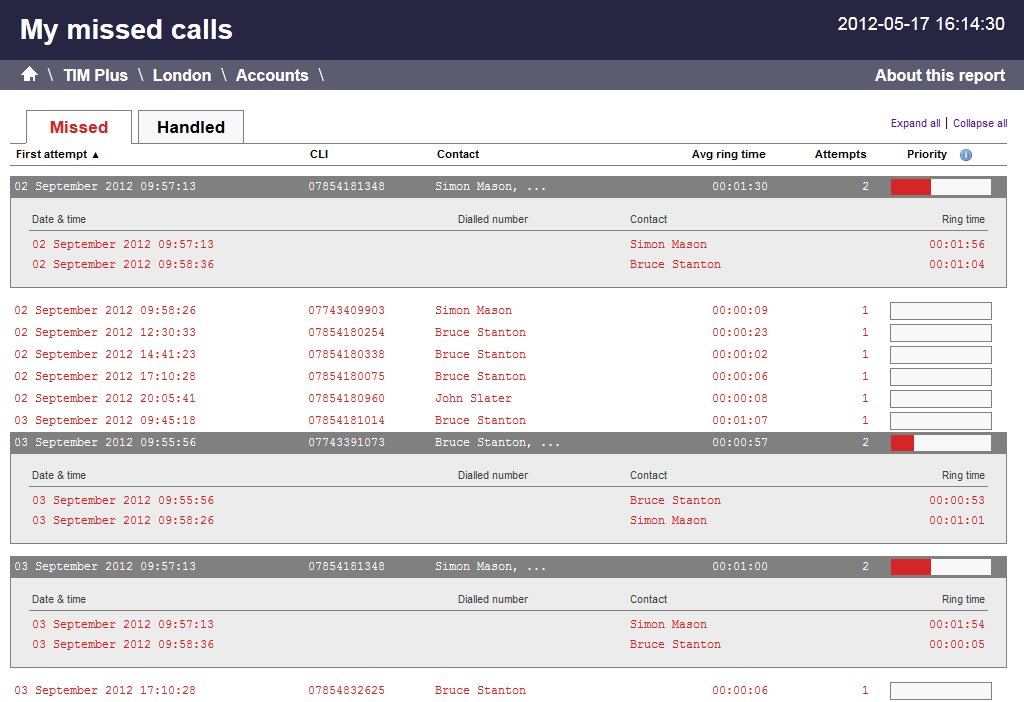 On the Reports screen, select the Missed calls report from the left-hand pane and click the Select this report button.

A new window will appear, where you can set the parameters of your report.

For each report, you must specify a time span that covers the calls you want the report to include. This is known as the "reporting period".

There are several preset reporting periods available for selection, based on the standard Gregorian calendar. The following table describes how the start and end times are defined for each preset period:

In addition to the presets described above, it is possible to specify a custom reporting period by choosing Custom period from the Period drop-down list and specifying your own  Start date, Start time, End date and End time of the period you want to report on.

Once you have set the reporting period, click on the Next button to set additional report parameters and options, or select the Finish button to run the report immediately.

The Reporting entity parameter allows you to select the part of your organisation whose calls the report should include, e.g. a site, a group or an individual user.

To report on a particular site, select it from the drop-down list or select All sites .

If a site has been selected, you are able to further limit the report's results by selecting a group from the drop-down list.

If both a site and group have been selected, you can further limit the report's results to include only calls involving a particular user, by selecting that user from the drop-down list.

Once you have selected the scope of your report, click on the Next button to set additional report parameters and options, or to run the report immediately, click the Finish button.

You can limit the results of your report by choosing one or more of the following filters:

To produce a report consisting only of calls that were made using a particular account code, enter the account code in the field provided.

To report on more than one account code, separate each code using a comma.

This filter allows you to define the type of call you want to report on, in terms of where the call originated and where it was delivered, e.g. incoming, outgoing, internal, etc.  To report on all types of call, set this to All calls.

If you use more than one carrier, you can limit the results to include only calls that were made using a specific carrier.

Calling Line Identification (CLI) is the telephone number of the remote caller in an incoming call scenario.

You can report on calls that originate from a specific CLI or those whose CLI matches a particular pattern of digits. For example, to report on all incoming calls from Tri-Line, you could enter 02072652600.

You can use the ! symbol to explicitly exclude a CLI from the report's results, and/or the * symbol as a wildcard in digit pattern matching.  For example, to exclude calls from Tri-Line, but include all others, you could use !020726526*. To report on more than one CLI, use a comma to separate each entry.

You can define a cost filter to include calls above or below specific values by entering your criteria, as shown below:

You can specify a cost range by using the - symbol; to specify limits, use the comparison operators, >, <, and ! .

If you want to filter calls to a specific, known destination, type the name of the destination in the text box provided. This filter accepts the ! and * symbols for excluding values and specifying partial matches, respectively.

For example, if you wanted to exclude all calls to France, you could enter !France*, as shown below:

To filter calls to a specific area, a partial number can be entered (e.g. 0033 for calls to France).

You can use the ! symbol to explicitly exclude a dialled number from the report's results, and/or the * symbol as a wildcard in digit pattern matching.  For example, to exclude calls to Tri-Line, but include all others, you could use !020726526*). To report on more than one dialled number, use a comma to separate each entry.

To filter calls above or below a particular duration, enter the desired duration in seconds.

You can specify a duration range by using the - symbol; to specify limits, use the comparison operators, >, <, and ! .

In the above example, the report will return only calls longer than 1800 seconds (30 minutes).

To filter your results to include only calls that used a Least Cost Routing (LCR) code, enter it in the text box provided.

You can use the ! symbol to explicitly exclude a LCR code from the report's results, and/or the * symbol as a wildcard in digit pattern matching.  For example, to exclude calls made using all LCR codes beginning 162, you could enter !162*. To report on more than one LCR code, use a comma to separate each entry.

This option allows you to filter calls based on their response time, measured in seconds. Specify the desired response time threshold in the text box provided.

In the above example, the search results will display calls that have a response time greater than 10 seconds.

You can specify a response time range by using the - symbol and; to specify limits, use the comparison operators, >, <, and ! .

This option allows you to filter calls based on the time the call started. Specify the start time in the text box provided using the hh:mm:ss format.

For example, to include only calls that began after 10 am, you could enter 10:00:00 in the Start time field, as shown below:

This section enables you to further narrow down your report results, by excluding certain types of calls. It also allows you to sort the report's results in a particular manner.

To show only a summary of your missed calls, instead of an itemised list, tick the box Summary only, as shown below:

Tick this option if you do not want to replace dialled numbers, CLIs and account codes with their associated names, as defined in your web user's contacts list.

Tick this option if you want your search results to include only calls that have notes associated with them.

Tick this option if you want your search results to include only calls that have an associated voice recording.

Choose from the Sort order drop-down list whether you want the results of your report to appear in ascending or descending order.

To sort your report's results by a particular column, select it from the Sort results by drop-down list.

Missed calls below a certain duration can sometimes pollute the meaning of a report's results. To exclude such short calls from your report, enter a duration threshold in the text box provided, e.g. to ignore calls below 3 seconds, enter 3 .

This option allows you to define, in hours, the time window in which a call must be responded to, in order to be considered handled. The default callback interval is 24 (hours), but you may enter your own value, as shown below:

This section allows you to choose the media format of your completed report. The formats available are Web, PDF, Excel, CSV and XML.

When you have selected a reporting period and have chosen any filters and options, you can either run the report immediately by clicking on the Run now button, or schedule it for future delivery.

Below is an example of this report's output in Web format. By clicking on the About this report link at the top-right corner of the page, you can review any filters and options that have been applied to the report.

As with all reports produced by TIM Plus, each page of the report includes the following information:

The Web format is the most interactive of all formats: all column headers are click-sortable and most graphical and tabular elements can be drilled down into, allowing deeper analysis of your results.

The Missed calls tab displays a table containing the calls that were missed and not responded to. Each column header of the table is described below:

The Handled calls tab displays a table containing the calls that were initially missed but eventually responded to. Each column header of the table is described below:

To modify your report to cover a larger organisational scope, click on an element of the breadcrumb as shown below: